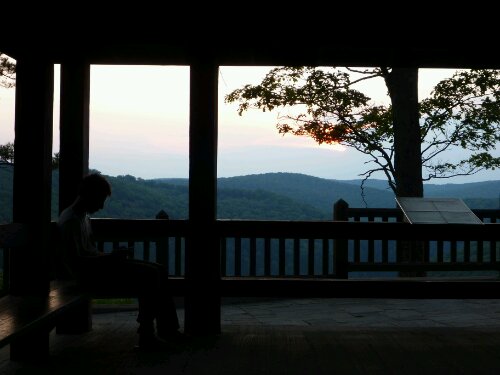 As I watched the sun set over the “Grand Canyon” of Pennsylvania I tried to think of something profound and came up short. Maybe that will come after I’ve been on the road for more than a week.  As I mentioned there doesn’t seem to be any stretch of Route 6 that could be considered flat.  On Wednesday while coming down a hill I met another cyclist named Gary.  He was using biking as a way to rest his knee after injuring it ultra-running.  As the side of the highway is not the best place for a conversation I didn’t get a chance to pick his brain on ultras.  He did however recommend a side road that was less hilly and much quieter.  There I found my campsite for the night. 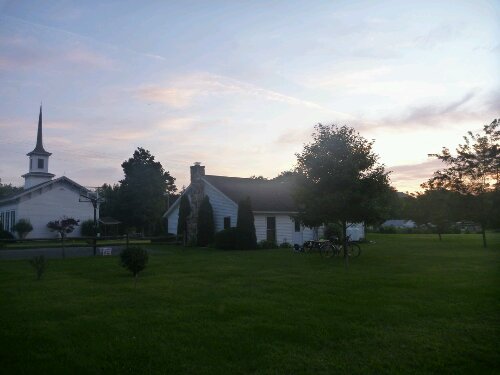 The backyard of the Standing Stone Community Vesper Church.  There was a sign welcoming people to use their basketball court and when I asked some neighbors they said camping was fine.  I hit the road the next morning and proceeded to bike about 70 miles to the Leonard Harrison State Park that you see at the top. Along the way I was stopped by a van of five PENNDOT employees who wanted to ask me about Bicycle Route Y, which I accidentally ended up taking through PA.  Apparently when they planned it 10 years ago there wasn’t as much traffic, especially truck traffic. Since then has come fracking, which is huge around here.  So not only does it make your tap water flammable it fracks with my bike route.

After looking around and setting up camp I made dinner.  Angel hair pasta with tomato sauce and pepperoni, a Pepsi from the vending machine, and mustard-garlic bread.  I wanted garlic bread but had no butter.  Mustard seemed better than peanut butter or jelly to spread on with garlic powder. You gotta get creative when you have limited resources.

More than halfway done with PA now.  This state is way too big.