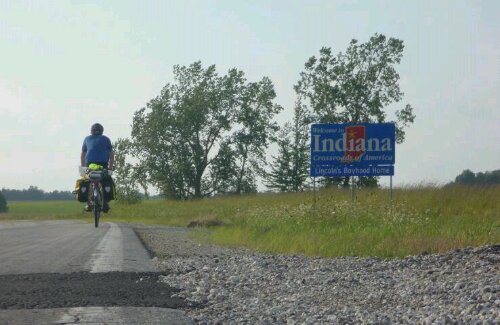 Its a very satisfying feeling when I get to throw out another map.  Hello Indiana, where I have no idea what time zone I’m in.  Because of the weather I did end up in the Cold Springs Hotel in Hamilton, IN last night.  A nice place, though lacking in wifi.  I was pretty close to going the extra 20 miles to the campground because it had internet.  The skies were still clear around 6pm, but the alarm on my weather radio convinced me otherwise. So my first real bed in over a week and a chance to do some laundry, dry out my tent, and top off all my electronic devices. Avoiding quarter sized hail was also nice. The route to get here wasn’t as simple as I had hoped.  As if to drive home the point I made in my last post most of the road I had planned on taking was closed.  Being on a bicycle does have its advantages, but there were still some parts I couldn’t get through. 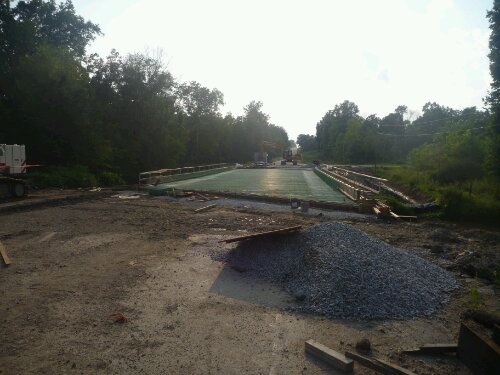 As I rode into town I saw a Mexican place called Acapulco which looked fairly busy.  When I asked Bob, my gruff host, about it he said “its mexican food, but its ok.”  Good enough for me.  The waiter didn’t believe me at first when I ordered a huge plate of nachos along with the carne asada.  (After getting a very large Dos Equis of course.)  Many of you know my ability to put away large amounts of food.  Well you should see me after I’ve biked 80 miles in 90° heat.  The before and after pictures: 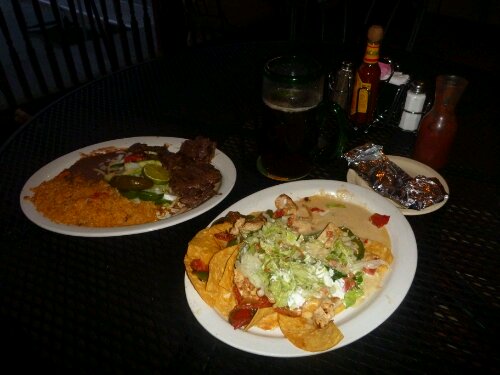 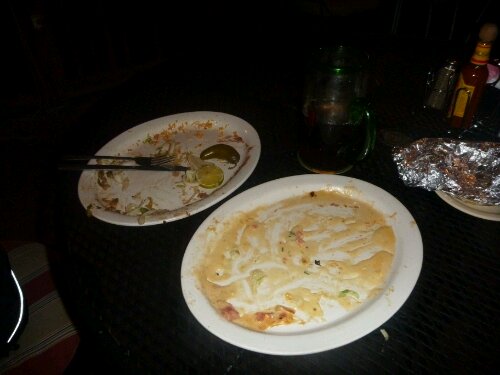 As I was finishing dinner and the lightning began it became clear I had made the right choice.  Bolts that went clear across the sky.  It was awesome, like a fireworks show coming from every direction.  My camera isn’t really suited to taking pictures of lightning but I did my best. 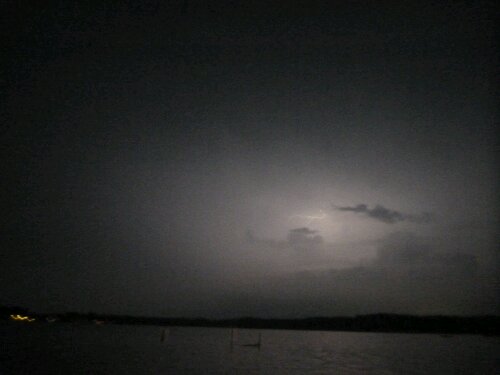 An engine that runs on peanut butter and jelly? 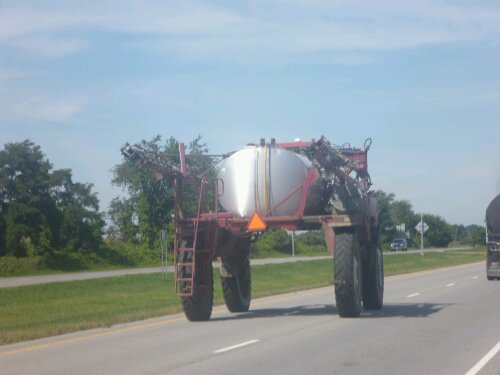 Quick explanation of the above picture.  There is a great story about a cyclist in the Race Across America who due to sleep deprivation hallucinated that he was being chased by zombies.  When I looked up and saw that thing above in my mirror I thought I was being chased by an AT-AT from Star Wars, or maybe that thing from Tron.  Freaked me out for a couple seconds.

Anyway, apparently Ohio IS high in the middle, at least for a little bit.  You know that feeling when you’re on a rollercoaster and you see a huge incline that looks like it goes on forever?  Coming up on a big hill is like that except the feeling for me is generally “Oh dammit, not another one” combined with a general sense of reluctant acceptance of a fate you cannot change.  So far today has been all flat however.  While biking through Norwalk, OH I ran across a cycle shop where I picked up a new pair of gloves and adjusted my seat again.  Not sure if its actually helping or its just a placebo but I made almost 50 miles in 3 hours and felt better than I have been.

Yesterday I had my first cramps.  It happened a bit after lunch and while it could have been the aforementioned hills of dehydration I think it was what I ate. Which brings me to the answer to Sean’s question about how I fuel the engine that are my legs.

Breakfast usually is pretty light. I want to get on the road ASAP so I’ll eat a piece of fruit, peanut butter and jelly sandwich, handful of crackers, etc.  Lunch is generally a sandwich. Sometimes I’ll stop and eat out.  In Tionesta, PA I stopped and had a burger, sweet potato fries, and ice cream.  I also get McDonalds, but thats going to a post all by itself.

My lunch for yesterday was a ham sandwich, half a container of supermarket macaroni salad, and of one those fruit pies. But filled with chocolate. Its no wonder obesity is a problem, its way too cheap and easy to put terrible fatty food into your body. The pie had 430 calories in it and I think between that and the salad my body rebelled against it, causing the cramps.  Garbage in, garbage out.

Dinner is the only meal I cook.  I’ve been experimenting with different foods, but its generally something high in carbs like pasta or rice.  Canned food that only needs to be heated works pretty well too.  Chef Boyardee worked well and I have a can of franks and beans.  Yum?  Also I love peanut butter and jelly.  I can’t expound the virtues of pb&j enough.  Its cheap, easy, and tasty.  Its often my ‘dessert’ and is my go-to food when I need to eat but don’t know what.

Finally there are my snacks.  Instead of those energy gels/goos/whatever I have a bottle of honey.  Its easy to eat while riding and keeps the calorie fire burning.  I also have a can of salted almonds, mostly for the electrolytes.  And that’s it.  I don’t keep careful track of the food I eat, but make sure to eat throughout the day, and eat way more than I would at home.