State of the union between man and machine 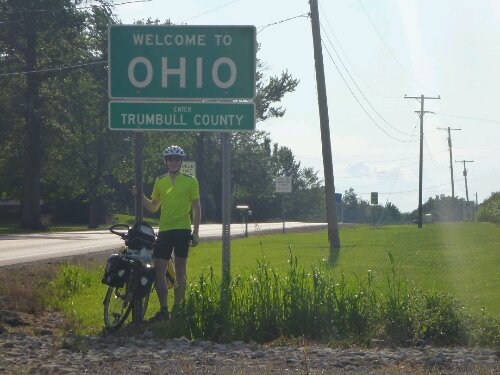 First of all: FINALLY DONE WITH PA!  Now there won’t be anymore hills.  Unless what they say about Ohio is true…you know, high in the middle, round at both…nevermind.  I actually looked at the highest point in Ohio on the map, Campbell Hill, and laughed at its meager 1550 feet. I climb that for breakfast.

On with the state of the union.  The machine is doing ok. Its going to need new brakes soon, but I already have some ready that I picked up in Scranton.  The chain needs to be cleaned and oiled which I’ll do tonight now that I should be rain free for a couple days. There is a hole in the rear tire which I picked along with my second flat a couple days ago.  Seems to be holding up fine however, and I have a spare tire just in case.  I also adjusted the seat and braking levers, which I’ll explain in a minute.

The body isn’t in as great shape.  My thighs are sore, but only if you jab them. So I don’t. My butt was pretty sore, though I think its resigned itself to its fate and actually isn’t as bad as it was a couple days ago.  Some slight twinges in the knees, though not pain, more as if they’re saying “don’t forget about us!”  All of this is pretty normal. The biggest problem is some faint numbness in my ring and pinky finger on my right hand.  I wouldn’t even really call it numb; when I touch something with one of those two fingers there is a mild pins and needles sensation.  After some research I’m pretty sure its ulnar neuropathy, also known as handlebar palsy.  It’s caused by compression of the ulnar nerve, in my case probably hyperextension of my wrist.  So I made the aforementioned bike adjustments. Plus I’m going to take it easy for a couple days and work on better posture.  Which should be easier in Ohio because when I’m climbing a mile long 8% grade my posture tends to go to crap. I’ve also been biking longer than I probably should.  I did 100 miles on Saturday.  I was getting really sick of the hills in PA.

Did I mention hills suck?

Thanks to everyone who has commented. I was writing this pretending people were reading it, but its great to know that people actually are and are enjoying it. Come back tomorrow when I give some stats and talk about meeting an egg bike.