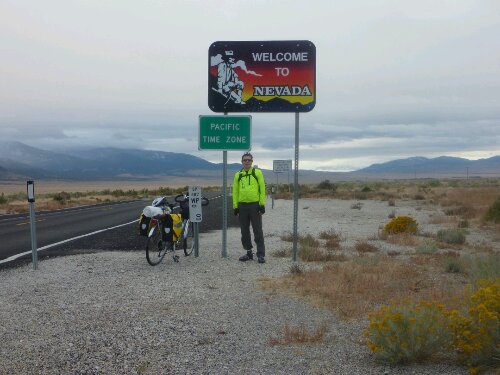 In a land far, far away (New Jersey,) I began my journey.  And as you can see I also have 2 states to go.  Its been a cold and arduous couple of days.  The “short” ride to Milford ended up being my first snow day.  There is a decent ascent between Cedar City and Milford which was high enough for the rain to become snow.  That was interesting.  I stopped in a town about 10 miles away from Milford and hung out at a gas station for a couple hours till I warmed up.

That night was below freezing.  I know because I woke up in middle of the night with ice on my tent.  I wasn’t very cold, despite the fact that my sleeping bag is only rated to 35°, because I’ve learned a couple tricks for dealing with the cold.  The primary trick is to wear almost all the clothes I brought.  Two thermal shirts, both bicycling shirts, a fleece, wind jacket, thermal pants, bicycle shorts (just one pair,) leg warmers, regular pants, gloves, and socks.  The other trick is to put my feet in plastic bags under said socks.  It creates a vapor barrier that keeps them warm.

The following day was the 80+ mile ride of nothing but climbs.  Water wasn’t a problem because I don’t drink that much when it never gets above 50°.  The 3 climbs did make for a slow day, but not too difficult. I made it into Baker,NV around sunset and ended up camping about 20 meters from Route 50, the Loneliest Road In America.  Freezing again, but again wore all my clothes and did fine. Woke up early and headed out for Ely, NV.

It looked to be an easy 50 mile day, but then I noticed the 7,100 and 7,700 feet summits.  What I’ve learned is that while some places like Iowa have rolling hills, Nevada has rolling mountains.  Its just range after range, and I have to bike over all of them.  Eventually I made it into Ely and started looking for a place to camp.

While looking for a place I also checked the weather and saw it was going to be in the mid 20s tonight.  While I would have been ok I probably wouldn’t have been that comfortable.  So I decided to get a hotel.  A women in the McDonald’s recommended the historic Hotel Nevada and the $35 casino rate sealed the deal.  While checking in I saw they had Texas Hold’em and how could I resist? I played for about 3 hours and made enough to cover my hotel bill with a little extra.  Mostly just folded a run of really bad cards, but eventually doubled up with AA.  Pretty nice getting a free room.