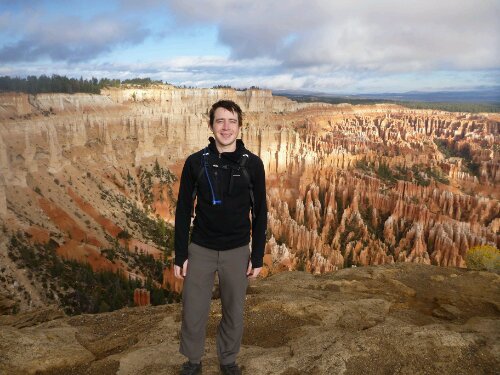 Right after I wrote and uploaded yesterday’s post it started to rain.  So I hauled ass to my campsite for the night and threw up my tent as quick as possible.  Woke up at 6am today in order to get on the first shuttle through Bryce Canyon.  Totally worth it.  Bryce was awesome, as you can see behind me.  Spent 3 hours checking it out and taking pictures of hoodoos.  That’s the first thrill.

I then embarked on my 80+ mile ride to Cedar City.  The first part was nice, including I think the first bike trail I’ve seen in Utah.  After that things got nasty.  20 mile ride south with the worst headwind I’ve dealt with so far.  Going downhill I was only doing 10mph.  It felt like if I stopped peddaling I would have rolled backwards. I then headed west into Dixie National Forest.  The trees blocked a lot of the wind, which made me feel a little better as I slowly made my way up to Midway Summit.  I gained about 2,500ft elevation to get to the top.  It also rained…again.  Not so much as last time, though the elevation made it cold enough on its own.

After getting to the top my efforts were rewarded with the second thrill.  The final 15 miles were all downhill.  I didn’t have to pedal at all and went between 25-30mph the whole way.  Very fun, but so very cold.  Its an odd sensation when your body is sweating but you can’t feel your toes.

Tonight I’m staying with Lynn and his family.  His son Ian has done some short tours and we swapped stories.  Once again, thanks to them for putting me up.